Four of the Covers of Old Magic

I have been blessed to live in beautiful areas almost all of my life. Born in the Hawkesbury Valley of New South Wales in May, 1959, my family home was a timber house on a hundred-acre farm growing potatoes, pumpkins and corn right on the banks of the Hawkesbury River. The river was my backyard and there were no fences. 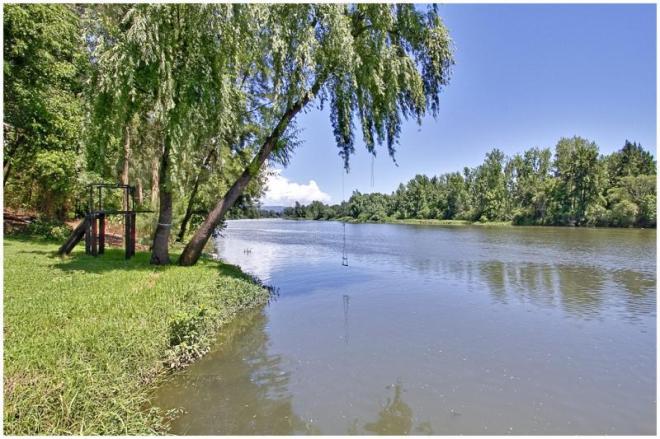 I remember swimming in it after school with my brothers and my sister, and watching it rise from my back veranda. That part was scary, especially when the alarm went out to evacuate. Sometimes there was very little time and once we only got away with the clothes on our backs. My mother and father worked the farm while raising us four children. Mum would have a tent set up on the property and when I was baby, she would put me in the tent while she worked. I can only image what a hard life it was, and yet, later, Mum would only talk of the farm with wonderful memories.

I don’t remember too much from my time on the that farm, except for my brothers, older than me by seven and six years, having the time of their lives, running free, chasing wildlife, teasing my sister and me while watching over us at the same time. I remember frosty mornings in winter that froze my fingertips, swimming in summer in a river that was sometimes so clear we could see through to the bottom, other times so muddy our clothes would end up stained brown. I remember catching a minibus to school at St Monica’s Catholic Primary School in Richmond and our many cousins who also lived in the valley. And I remember the willow trees that lined the riverbank.

But half-way through my Kindergarten year a flood washed our house away and all of our belongings. It was the first major move in my life. My parents found a small property they liked at Plumpton, on the outskirts of Sydney where there were still open green spaces at the time. On a dirt road called Glendening they had a brick house built where I shared a room with my sister. I attended Marayong Primary and Infants School, and then Rooty Hill High School. I remember both schools quite vividly – the layout of the buildings and classrooms, the assemblies, standing on the asphalt for ages while the sun burned down on our heads (before hats were compulsory). I remember having close friends but no one who lived within walking distance. I spent my spare time listening to the radio and reading.

When I was sixteen I began working as secretary for a solicitor for the legal office of what was then called the Electricity Commission of NSW. I commuted by train quite a distance, but I enjoyed the work, especially when computers were introduced into the office. I was one of the first trained to operate them. I remember the processors were like big filing cabinets and every afternoon we would have a ten-minute process to back up the entire office’s work for the day.

My next major move occurred after I had married John Curley at 21, to a brand new suburb called St Clair where we had three children – Amanda, Danielle and Christopher.

On my wedding day on 24th May, 1980, with my eighties hairstyle and littered with confetti. 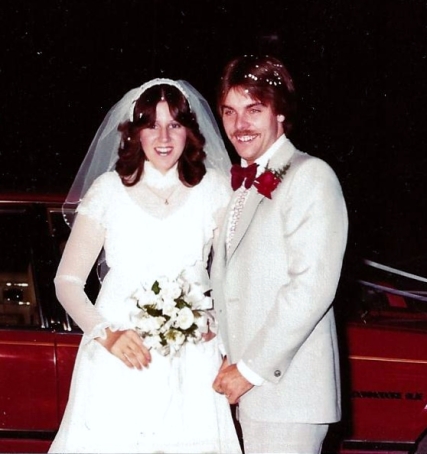 When Amanda was six, Dani was five and Chris was two, we decided to move to Coffs Harbour, a tourist area on the mid north coast of New South Wales. It was there I started teaching at the Coffs Harbour Education TAFE Campus. I taught Office Studies and Computers to senior high school students and adults. Coffs Harbour was the perfect place to venture into writing and it was not long after the move there before I took writing courses by correspondence. 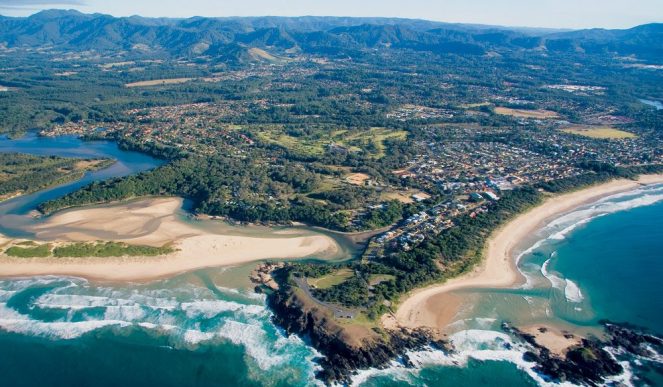 Looking down onto Sawtell with a view over the beaches and estuary.

Well known for its beauty and diverse landscape, Coffs Harbour is where the Blue Mountains meets the Pacific Ocean, creating a unique environment of beaches, mountains, rainforests, waterfalls, creeks, rivers, green valleys and even its own unique weather, high humidity in summer, but a lovely breeze by midday. My first attempt at writing a novel was a romance. It was not publishable, but many attempts later, and writing for young adults by now, I found an agent who loved my work, and Old Magic was picked up by a London publisher called Bloomsbury in a small auction between three interested publishers.

I can’t have a biography without mentioning my experience with life-threatening bone marrow cancer. I was diagnosed in 2004 with Myelofibrosis. It turned my life and my family’s lives upside down. After a battery of tests, I was told I had little time left to live and without a stem cell bone marrow transplant from a matching donor I would die soon. My brothers and my sister were tested, and fortunately for me, my sister proved to be a perfect match, as if we were twins,  even though we had different blood types and were born four years apart. My Oncology team gave me only a 30 to 35% chance of surviving the transplant process, but with no other option, I enthusiastically embraced the transplant. I spent five months in hospital, most of it in quarantine, undergoing high doses of chemotherapy. I lost my hair, endured kidney failure, allergic reactions, a fall that caused a crushed back injury that only became worse as the days turned into weeks and months, but I came through it all with the help of the life-saving medical staff of Westmead Hospital, my sister’s strong stem cells, the support of all my family and friends, and the incredible amount of prayers said for me. I am truly thankful and grateful to be alive.

After this episode in my life, and still in a lot of pain from my crushed back injury, it would be several years before I could regain my concentration enough to start writing again. By now the writing world had changed. We had entered the digital world of publishing. I had many adjustments to make, but I was determined to be published again. The Avena Series would do that for me.

Today I live on Mount Tamborine in Queensland’s Gold Coast Hinterland. It wasn’t easy finding another area as beautiful as Coffs Harbour, or as conducive to writing, but somehow we did. 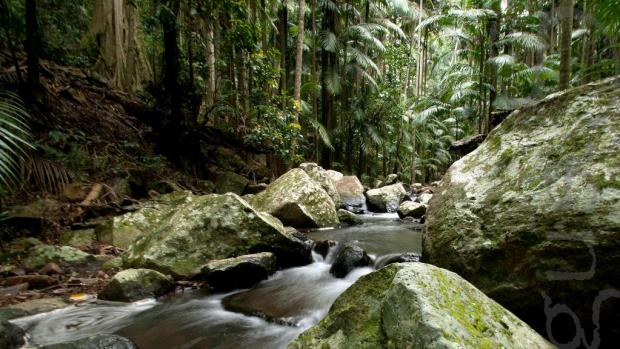 There are no beaches up on Mount Tamborine, but there are rainforests with walking trails to waterfalls and views over the Gold Coast to the Border Ranges. Here it’s not about the tourists and beautiful beaches, it’s more about the community. With a population of only about seven thousand, many of these are artists and craftspeople, or lovers of the arts and generous supporters. I couldn’t have found a more idyllic place to write my books. By now I was looking to write my fifth.

My backyard is full of wildlife thanks to the rainforest that slices through it.

Below are some photos of me with other writers and fans I’ve met through some of the events I’ve enjoyed since becoming a writer.

The first one below is me on the right with Traci Harding on the left. I’m quite short these days. After my crushed back injury twelve years ago I lost over seven inches in height. That’s about 18 cms from my hips to my neck.

In the next photo I’m with Isobelle Carmody and Michael Pryor at Supernova, Gold Coast. 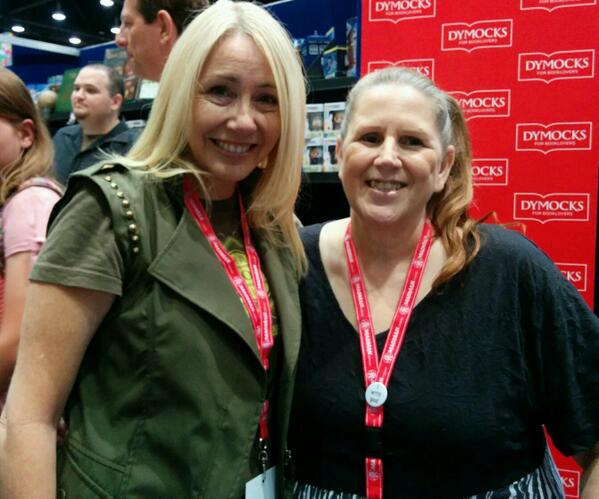 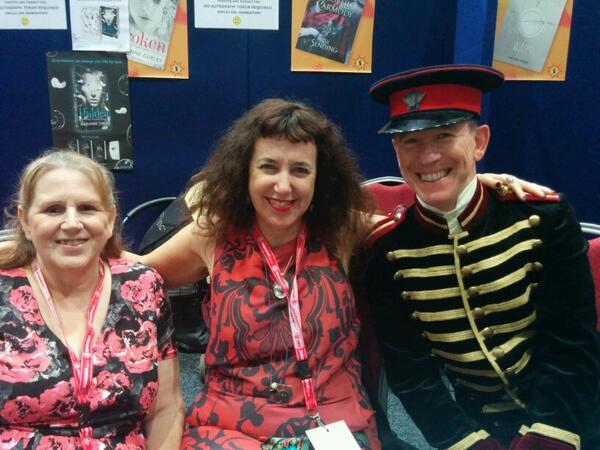 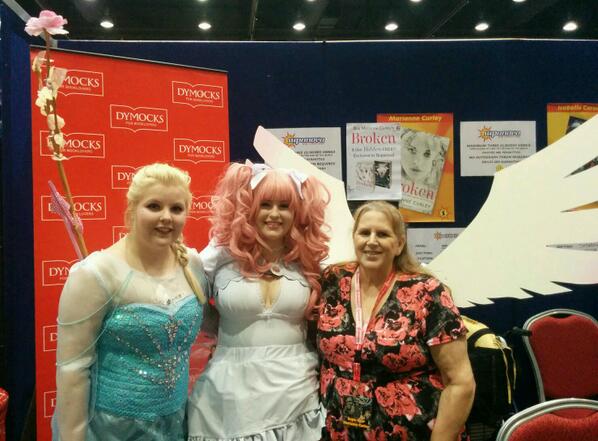 These girls above had a set of wings with them. I love how in the photo the wings ended up looking like they were mine.

To date I have seven books published – Old Magic, The Named, The Dark and The Key, Hidden, Broken and Fearless. I am currently working on The Guardians of Time Book Four, due for release in September 2017.There is also a contemporary young adult fiction in the works and a YA paranormal fantasy with time travel. 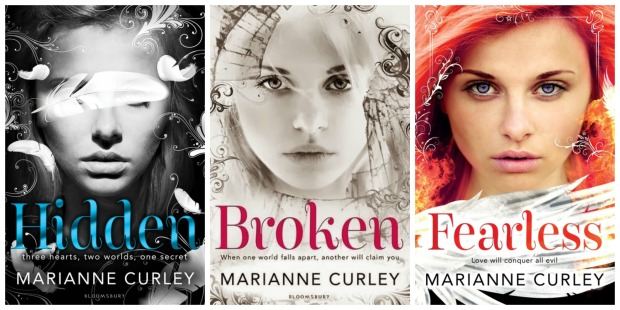 The Guardians of Time Original Covers, and above is The Avena Series