The Guardians of Time is a Young Adult Paranormal Time-travel series of four books – The Named, The Dark, The Key and The Shadow. It is set in an Australian country town called Angel Falls, situated in the Southern Highlands of New South Wales and the Australian Alps of Victoria. This series has received high praise and won several awards. The latest addition The Shadow was released in 2018. The Guardians of Time Series now has new fantasy covers, available in paperback and e-book. Look for them on online bookstores.

“The Shadow is just the perfect continuation of one of my favourite series of all time.

Everything I wanted to happen, happened. It felt like everything I’d known for the last ten years was a lie and it was such a good feeling. I re-read the whole series before I read The Shadow and so my heartbreak was fresh going in. Everything that my little fangirl heart could have asked for to fix it was given to me and I’m so happy!

The ending was perfect because it rounded off one story and left the door open for their future story. I don’t know whether we will ever see that story, but I for one, would love to read it.” 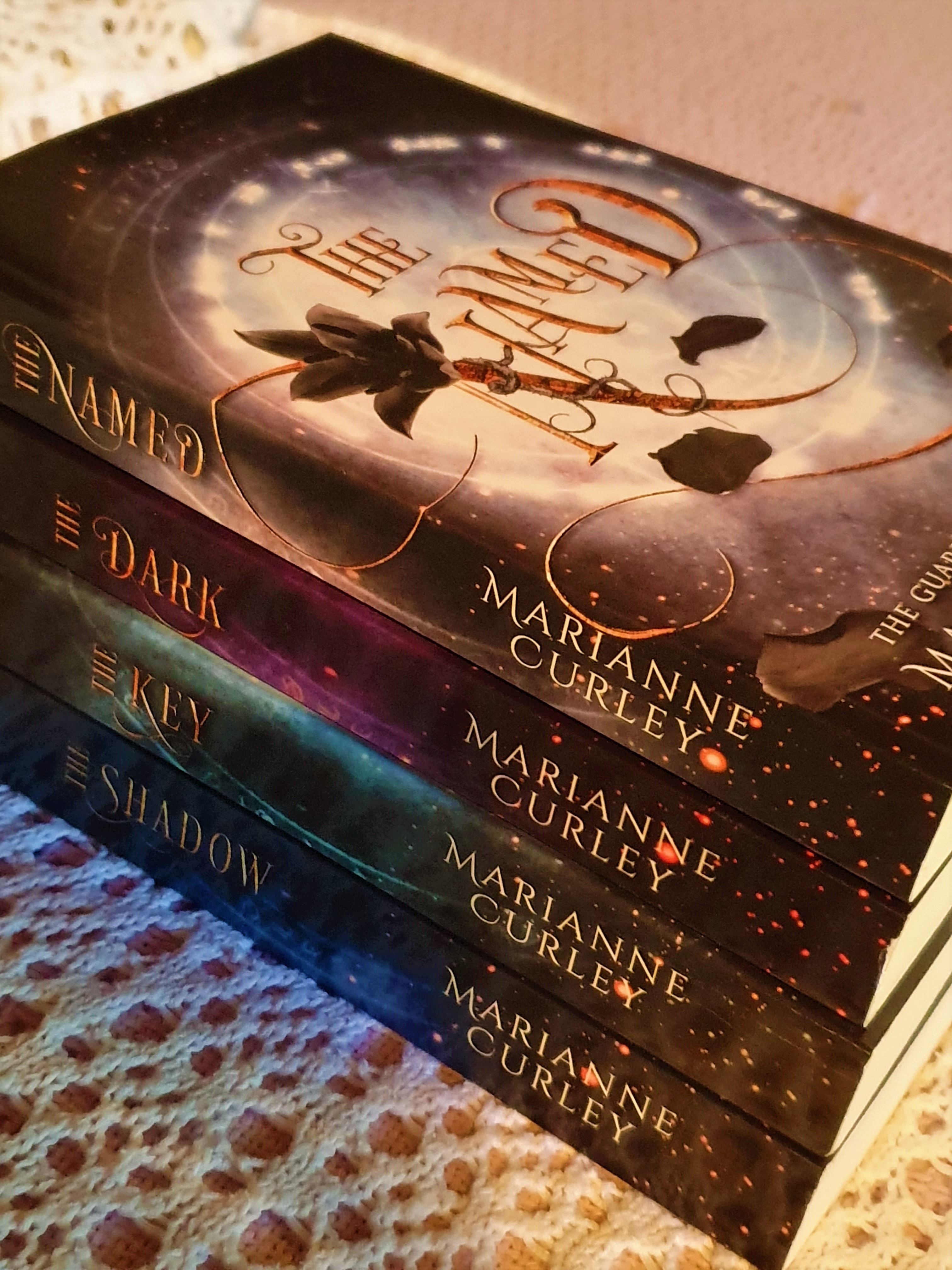 Where to Purchase The Guardians of Time Series with their all new matching covers.

Many online bookstores are now carrying the new covers of all four books in the Guardians of Time Series. Those listed below are some of those.

Booksradar.com – Books in the Right Order

Amazon USA for Kindle and Paperback

The Guardians of Time New Covers

“Marianne Curley weaves her writing with masterful threads that leave the reader spellbound and waiting eagerly for the next instalment.” – From Mrs Mad’s Book-A-Rama

Marianne signing The Named for a fan…

Imagine if you were able to change history. By altering one tiny thing you could start a chain of catastrophic events. Ethan is one of the Named, fated to stop this ever happening, although the forces of chaos have other ideas and Ethan is finding it more and more difficult to stay one step ahead. He is also a normal schoolboy, whose life is rapidly becoming far too confusing. So when Isabel arrives on the scene she is only going to make matters worse . . . or is she? This is history in the making – literally.

Isabel and Ethan are joined by Isabel’s brother Matt, who is still getting accustomed to life in the Guard. This time, they must find Arkarian, their ageless mentor, who has been kidnapped and sent to the underworld. Although Isabel and Ethan have been forbidden to rescue him, an ever-increasing connection to Arkarian drives Isabel to convince Ethan and Matt that they must risk everything to find him despite the potential consequences.

The battle to protect the future is coming to an end as the evil Order of Chaos launches their final attack on the Named. To defeat the Order, the Named must locate the Key to a treasury of weapons hidden somewhere in the ancient city of Atlantis. The race is on to capture the Key before a horde of undead soldiers find it. And as the Named work against time, one of their own is plotting against them.

The battle has come and gone. The war is won. The prophecy complete. But life can’t just pick up where it left off. Many members of the Guard struggle to cope with how the battled ended and all that they lost.

Ethan, particularly, has become at odds with his friends in the Guard. He finds himself adrift, jumping at shadows and sensing things that can’t possibly be there.

Lathenia, the Goddess of Chaos, has kept secrets from her Immortal brothers. But now her secrets are unravelling. Her plan for world domination is coming unstuck. When one of her secrets becomes known, vengeance erupts and threatens to take over. But love intervenes, putting Lathenia’s plans for world dominance in jeopardy.

As the Guard and the Order battle through the past and into an impossible future, darkness lurks around every corner, and the fight for the world’s survival will come to rest with just one.

The Guardians of Time On You Tube

Nancy Králová, a long-time fan and now also a friend of mine from the Czech Republic, produced a video unravelling the Prophecy from The Guardians of Time books. This video needs a Spoiler Alert for those who are new to the series. Thanks Nancy Králová for doing a brilliant job! I admire your devotion to this series. You amaze me.

M2 Productions have made a video on You Tube honouring The Guardians of Time Books. It’s amazing and I love this video. Here is a link to their Facebook Page. Thank you M2 Productions.

The Guardians of Time Prophecy

Jennifer Mae on Teen Ink has reviewed The Named – This is how it begins . . .

“Marianne Curley made me believe that people can really time travel by reading her book, The Named. In this book of uncertainty and great ideas, not everything is what it seems. Fantasy and reality come together in this book where worlds and dimensions collide. The Named is the first book in the Guardians of Time Trilogy by Curley.”

Review on Mrs Mad’s Book-A-Rama, for The Dark, with comments included at the end. This is a sample of what Mrs Mad says:

“What a truly stunning follow up to her first novel. The story flows on as if they had been written together, with the characters really coming to life and developing into fascinating people. This is an inspired book that combines the world that we recognise around us with another that channels right back to the legends of Gods and Immortals. Marianne Curley weaves her writing with masterful threads that leave the reader spellbound and waiting eagerly for the next instalment.”

Booklist Review
Gr. 8-11. The Guardians of Time Trilogy concludes with members of the Named–young adults with extraordinary gifts–facing an epic showdown of good and evil, with humanity’s future at stake. The Order of Chaos, led by power-monger Lathenia and her cohort Marduke, seems stronger than ever, commanding meteors, rats, and armies of the undead, while attempting to change history’s course via time traveling. As the Named’s members complete initiations into the Guardians, there’s another snafu: it seems one of them is a traitor. The group battles foes and issues of trust and time, as an ancient prophecy nears realization. Matt and Rochelle’s alternating, present-tense first-person narratives add suspense to an engrossing, if not dense, read, driven by detailed descriptions of a dizzying array of magic devices, events, time periods, and settings. Given the extensive backstories developed in previous titles, readers familiar with the series will be the most comfortable audience here, as well as the most willing to overlook the rushed conclusion and a few inconsistencies in the story.